New buildings of the University of Ostrava: A collection of art and design and a site for sport, health and technology

Two new buildings from the architects Kuba and Mrva are planned in the city center at Černá louka, and will serve both students and the public.

The University of Ostrava plans to build a new multifunctional area which will serve students and the general public. One of the new buildings will be a modern base for sport, health and technology, the second one will be a cluster of design and art of the Faculty of Fine Arts of the University of Ostrava. This could lead to a revival of an area long considered dreary which adjoins the historical center of the city and has been a thorn in everyone’s side as evidenced by the online city polling project FajnOVA as something they would like to see vibrant and functional.

The university acquired the lands as gift from the Statutory City of Ostrava. There are less than four hectares in the area behind the Antonín Dvořák Theatre in the city center. At the present in this area are Miniuni (miniatures of famous sights) and a tram loop. This is not a problem according to the City of Ostrava Mayor, Tomáš Macura, because in both cases the city has prepared their re-location.

“We do not consider the support of top-quality education to be just a marketing slogan, we mean to take it seriously, which is one of the main priorities of the city within its strategic plan FajnOVA. We do not want to be a center of technical education only. Years ago Ostrava significantly contributed to the foundation of the Faculty of Medicine, we are now at the beginning of another key project with the University of Ostrava which is receiving significant support from the city. We have been looking for a suitable location for two new university buildings for a long time and discovered it in the area between the Antronín Dvořák Theatre and the river. Whereas today the location is considered an unattractive location very near the center of the city, the presented project offers the opportunity to use the space meaningfully, so there would grow new modern architecture and start a new life. The essential thing is that the two buildings will not serve exclusively the university but they will be involved in the public life of the city. Therefore, we consider the gift of the city lands in the amount of approx. 42 million CZK to the University of Ostrava as a meaningful investment which will contribute to the development of the city and the whole region,” said the Mayor of Ostrava Tomáš Macura, who on a press conference held on 17 April 2018 also pointed out that he considers the student life to be an important city factor.

The University of Ostrava wants to finance the construction of the two buildings from funds provided by the European Union, nearing 900 million CZK. It has to submit the project to the Ministry of Education, Youth and Sports till the end of June. “The European grants are the only way how to finance this project within the following ten years, which is why we had to act very fast. Moreover, the university’s contribution is only five percent which is very favourable for the university,” states the Rector of the University of Ostrava Jan Lata and he adds that in that way a big thanks belongs to the management of the City of Ostrava which made this whole project possible by giving the lands as a gift. “The cooperation of the city and our university is exceptional within the whole Czech Republic and we really appreciate it.”

In the case of the sports field, the University of Ostrava sought cooperation from their sister university, the Technical University of Ostrava’s Department of Architecture and found a student whose father is Roman Kuba from the architectural studio Simona. For the design of the cluster of art and design of the Faculty of Fine Arts the university addressed the architect Kamil Mrva, who is also significantly connected with the local region, particularly with Beskydy.

“The University of Ostrava has always functioned in synergy with its region, that is why we decided to cooperate with architects with international renown but working in our region,” said the Rector of the university Jan Lata.

Both projects are supported by the management of the Moravian-Silesian Region. The region gave the University of Ostrava a grant for the preparation of building documentation. “We place the support for sport, health and technology of the University of Ostrava among the strategic projects of the region focusing on the support of sports in the region,” specifies Stanislav Folwarczny, Deputy of the President of the Regional Council of Education and Sport.

The projects will be submitted to the Government Commissioner for Structurally Disadvantaged Regions program, RESTART, in June; the decision about the grant allocation will be known by the end of the year 2018.

At the moment the University is finalizing both projects in co-operation with architects in order to submit their application for the grant in time. If successful with the grant the university will be looking for building contractors at the beginning of 2019 and it will begin construction that summer. If the grants are unsuccessful, the lands will be returned to the city.

The base for sport, health and technology

The University’s Faculty of Education Department of Human Movement Studies (DHMS) is taking part in the preparation of this vast sports field as their office will be relocated to the new facility. DHMS cooperates with experts from all over the world who participated in the preparation of the new sports center, as well as in an excellent research program called “Healthy ageing in an industrial region”, which is interested in the influence of regular physical activity in a polluted environment on the population (on this project it cooperates for example with the Czech Academy of Sciences or Faculty of Medicine of the University of Ostrava).

“We are the only public university which does not have its own base for sport activities. However, our department belongs to the top Czech field of human movement studies and as one of only four universities in the Czech Republic offering a doctoral studies of human movement,” the docent Daniel Jandačka, head of DHSM, explains and he adds “Furthermore, in our region life expectancy is two years lower compared to the nationwide average. This is the main reason why we consider not only the sports field but also the base for the science and research in health to be very important.

According to him, the modern base for sport will also attract more promising sportsmen who can later on represent the region in the world and it will help to lower the number of young people leaving the region. The area is designed in a way that it enables the organization of sports events as well as cultural events, for example concerts. Part of the architectural design is a massive staircase and grass surface on the roof which will be permanently open to public.

Inside the building will be aerobic, gymnastic and fitness halls, halls for ball games, a running track, and climbing and boulder wall. Outside will be built a new work-out zone, ball games field and athletic track. Part of it is also the base for scientists in the means of, for example, sleep, biomechanical and physiological laboratories, laboratories with magnetic resonance and sonograph or laboratory for the analysis of functional state of the organism. Last but not least, there will be auditoriums for students and the Department for Human Movement Studies office.

“The indoor sports areas will have the most modern IT technology which we hope to obtain valuable data , accelerating our research of human movement and health or increasing sports performance a step forward on an international scale,” Jandačka explains. “This enables the new unique study programs to be created such as Coaching and sports performance or Behavioural health with the use of technologies that reflects the market needs. The graduates will be able to work with physiological functions or organism strains via the mobile technology. The base will also help us in our research on the causes of elbow joint injury which often terminates sportsmen careers too early or the influence of unlimited intake of sugar on the sports performance,” he names just some of the possibilities.

The essential is that everything what will be built here will be fully available even for the public. People can just run on a professional surface but they can also take part in a research which might be interesting and contributing for everybody who cares about his/her own health.

Collection of Art and Design

The new building for art and design of the Faculty of Arts of the University of Ostrava will provide, in the first phase, a space for music as well as design which are at the present in absolutely unsatisfactory conditions. For the art disciplines, the essentials are missing such as spaces for creative education where students can implement their art projects in professional way.

As part of the construction there will be built a Center of digital technologies and design, multimedia classroom, four dozen of specialized exercise rooms and classrooms, an Opera studio, a music hall, a studio for acoustic direction and postproduction and a specialized lab and teaching studio for music therapy. At the same time, it will be part of a DesignLab offering training space for exhibitions which promise international exhibition activities and a MusicLab in the form of a training space for chamber music bringing an international program.

According to the Faculty of Fine Arts the special interconnection between the performative and visual arts within one building will bring to Ostrava talented domestic and international students as well as attract first-rate foreign musicians and designers as visiting professors of faculty.

“An important mission of every university is community engagement which the Faculty of Fine Arts has in its DNA. This building creates a professional platform not only in relation to the labor market, but also to open laboratory conditions, where students will have the opportunity to work on a professional level and the public will be able to get acquainted with it. The art disciplines need a professional base, although it has been often questioned because the art is not a humble public service. Contrariwise, it is very critical and it names the problematic topics in society,” said the Dean of the Faculty of Fine Arts of the University of Ostrava during a press conference. 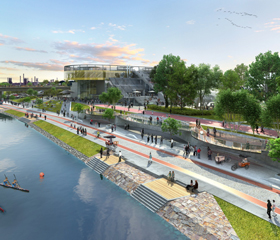 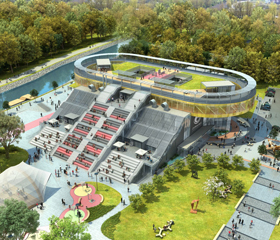 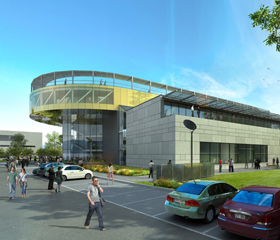 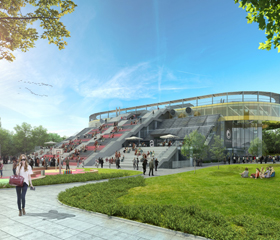 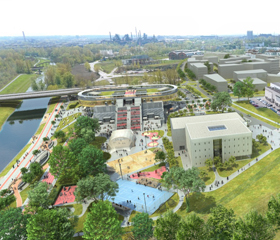 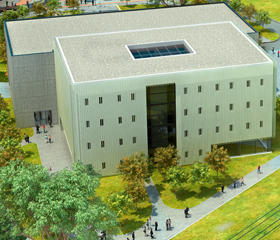 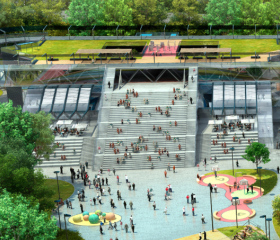 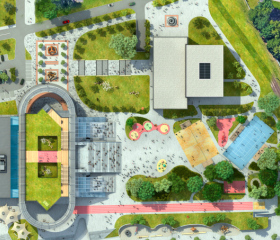